The Audacity Code by Juanita Johnson 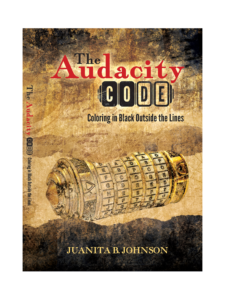 Summary: Living beyond the boundaries of prescribed inferiority requires an attitude of audacity and a determined code of conduct. Still, some African-Americans defy societal limitations and built lives of achievement by coloring outside the lines.

The Audacity Code shines a spotlight on 13 of these disruptors including:
o the little known African-American car manufacturer
o the visionary African-American farmer who turned ninety cents into an agricultural empire
o the pioneering African-American television chef and food ambassador.

Now for the first time, the foundational principles employed by these and other mavericks to do well for themselves and the world are revealed in The Audacity Code.