Consequences: A Novel of Unlikely American Heroes by Tara Dacus 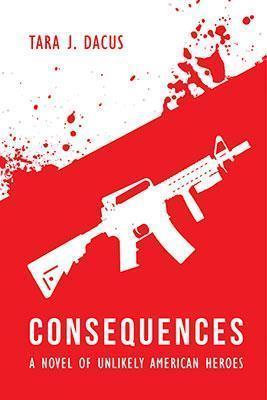 Just across the eastern hills from Napa Valley sits the bountiful Suisun Valley. It adjoins the robust and diverse city of Fairfield. While less prosperous than its neighbor, it balances by huge community involvement and commitment to protect and nurture its population, especially youth.

It is here where three precious, and someday very well known, babies are born within hours of one another – Katie Gonzalez, Taylor Turner and Leon Phillips. As teenagers, they meet in a serendipitous way and over time, become unlikely but lifelong friends.

Katie is a first generation American, from a loving and hardworking Hispanic family. Growing up, even with the high expectations from her mother and her Rotary mentor, attorney Betty Lam, all were eclipsed once fifteen year old Katie discovered her passion. With extraordinary determination and God given talent, her debate skills became unsurpassed, particularly on the topic of senseless gun violence. Seared by personal experiences and those of close friends, she could and would, go “toe to toe” with anyone on the importance of sensible gun laws. She will become a life force on the cause.

Loss of his mother from gun violence followed by foster care disasters, threatens to break Taylor’s spirit and future. With a thread of hope, a worn teddy bear and an unwavering social worker, can the black ten year old child open his heart yet again? The red front door opens to him and Taylor recognizes the tall blue-eyed man who is smiling warmly before him…his hero from a trauma months before. Stability and love, along with homemade chocolate chip cookies, await him inside with fireman, Tom, and his wife, Jenny. Will this lead to the life his community hopes for him?

Leon is tall and lanky with distinctive red hair, like his dad’s. At twelve, he had a jump shot that made the high school basketball coach salivate. Emotionally fragile, he is making progress towards a stable life thanks to a caring father, his doting grandma and PAL (local Police Activities League) where he learns to box. The Phillips Gun Range, still owned by his grandma, is where he learns to shoot…and he loves the feel of a gun, even more than his basketball. Then it happens. His world crumbles. His community rallies, as do his friends. But, will it be enough to save him - to save those who are the cause of his tragedy?

All three characters are bound together by devastation caused by needless gun violence. How does a community, service groups like Rotary, public entities, non-profits succeed– all with earnest goals to help people, to keep them safe - when there is an endless number of guns flowing into the hands of anyone who wants them? The point of the book is a grandmother’s desperate effort to humanize and yes, make it personal to all who profit from the scourge of assault rifles in the hands of vulnerable people.