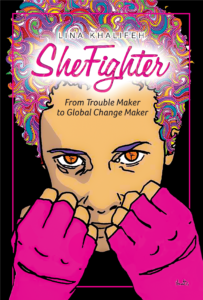 Summary: In 2004, Lina Khalifeh, a young Jordanian woman with a championship background in Taekwondo, had a chance encounter with a fellow college student that initiated a worldwide movement.
SheFighter, the first self-defense studio exclusively for women in the Middle East, came to life after Lina talked to “Sara” who had been physically abused by her father and brother. Starting from nothing – and on a shoestring budget – Lina has built SheFighter into an internationally-known organization dedicated to increasing women’s safety and self image.
Honored around the world for her innovation and courage, Lina remains passionate about her work and about empowering women and girls, especially in her home region.
She invites you to read her inspiring story: SheFighter – From Trouble Maker to Global Change Maker.